Exciting, wild, dangerous. Route 67C, or Transalpina, formerly known among shepherds as the Devil’s Path. Although today it is already subdued throughout almost the entire length by asphalt, it still can play tricks in a truly devilish way.

We learned it the hard way in August 2013. Crossing the highest parts of this incredible route, our delight suddenly turned into fright, because of the great dragon-like cloud, which had swallowed us and spewed out at the very bottom of the way. Technology proved to be very effective in the fight with the beast, and thanks to navigation we leveled the playing field. I was observing on the screen what bends were coming and how sharp they were. We were gliding through the “milk” with a few meter visibility, above precipices hidden in white depths, while moving through the virtual path on our GPS simultaneously. This way we safely reached a tourist village of Ranca. The next day, the devil did not give up, adding rain to the fog. The shudder came back with redoubled force, because, to make the matters worse, we were travelling with a cracking, crappy tire (Mitas E08), which had been bought just a week before departure. Fortunately, as it often happens on the road, also in this case our problem turned out to be a generator of awesome adventures. 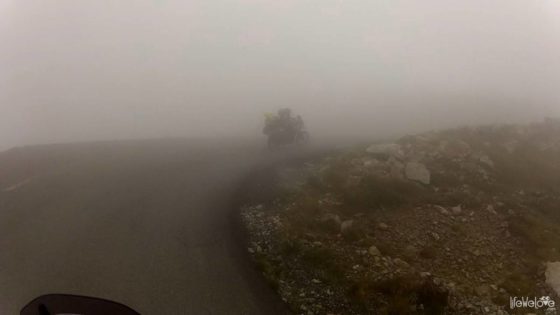 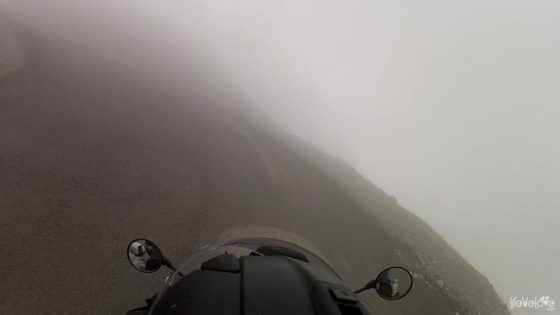 In the kingdom of the Giants from the Parang Mountains 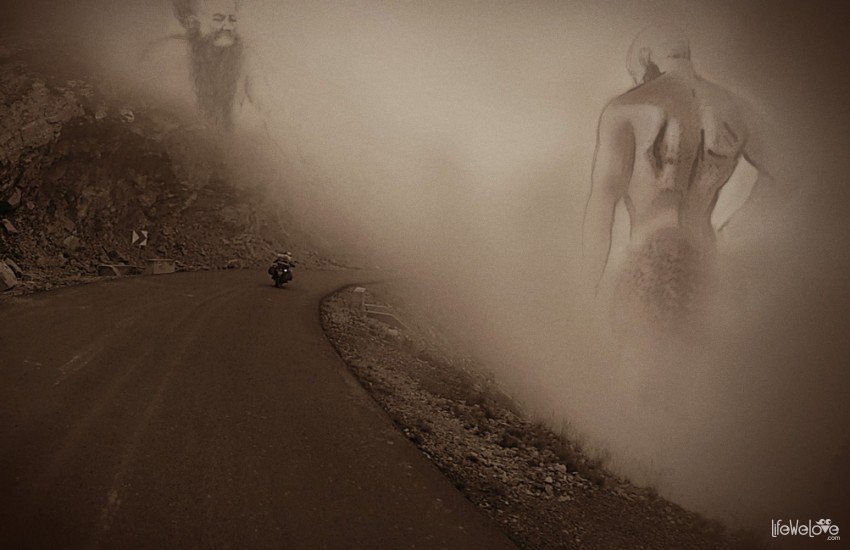 Transalpina is so unusual not only because it is the highest located road in Romania. The Parang Mountains and their surroundings are shrouded in mystery. Legends say that Transalpina was the Path of Giants. It was them who shaped it by forming caves they inhabited and lakes, in which they were taking baths. According to one of Romanian tales, once upon a time, a giant had spotted farmers plowing the ground. He grabbed them and carried to some other giants, who were sitting at a stone table: “Look what I have found, they are destroying our land.” Another of the giants replied: “Leave them, they are worms of the Earth!”

The stone table can be seen from the road. On the map it appears as the Masa Jidovului. From stories about giants we also learn that they built tunnels across the Carpathian Mountains to help ancient Dacians defend their country against the Romans. Thanks to the tunnels they could quickly draw back their troops, let them rest hidden and then attack again. Interestingly, the name of the village Novaci located in the eastern part of Wallachia means “a giant”. The name comes from the name of Novac, which in Romanian mythology is assigned to a hero of a strong physique. Sometimes Novac was presented as giant, who beat numerous armies that hit Romania.

[At this point, many thanks to Dan Munteanu from Bucharest, who introduced us to interesting folk tales of Romania.]

Located about 150 km away from Transalpina in a straight line, the Bucegi Mountains conceal a mysterious story of some unusual discovery. It is said that a whole grid of underground tunnels and giants’ remains were found in 2003. However, the Romanian government and the U.S. authorities withhold any information on this subject. Various legends started to circulate around the Bucegi Massif, telling of inexplicable phenomena taking place there and involving nature and people.

By immersing yourself in these stories you can kindle your travel hunger to explore Romania. I find this land very mysterious and distinct in peculiar manner from the neighboring countries. Perhaps, after you cross the Path of Giants and Transfagarasan Road, you will reach the Bucegi National Park to stand there face to face with a famous Sphinx and feel energy of the ancient, holy place of Dacians. :) 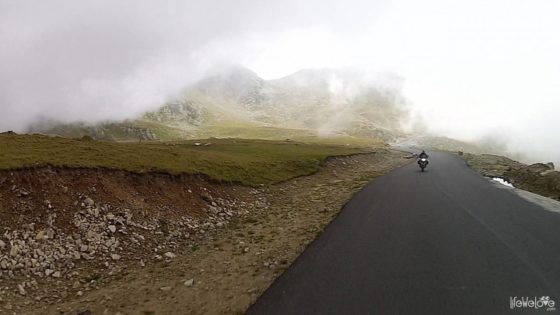 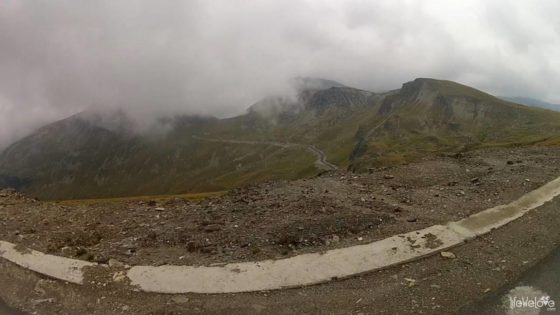 Fresh asphalt on the edge

Transalpina is 130 km of unforgettable and newly refurbished road along the mountain ridges, passable only during the summer. When coming from the north, it has its origin in Sebes, and ends in the mentioned village Novaci. Initially, it leads us quietly through a few small towns with typical Romanian scenery, where wooded mountain slopes appear on the horizon. Along with the rising altitude, the route gets more interesting, urban settlements gradually disappear, giving place to the wild nature. Here and there some fragments without asphalt arise, sometimes very short ones, about 1,5 m long.

When reaching the Oasa Dam you can stop and buy bunch of tourist souvenirs or taste local treats sold in small booths. Something called Kurtoskalacs drew our attention. It turned out to be a typical… Hungarian delicacy made of yeast dough, rolled up on cone-shaped baking spit, sprinkled with sugar, nuts or some seeds. It was so sweet that the three of us were not able to eat it all. :)

The most interesting part of the road begins up from the dam. The smooth asphalt meanders with many curves up to the junction with road 7A. After driving a short distance through the road 7A, we enter Transalpina again to experience its most wonderful part. The road climbs towards clouds to finally immerse in them at the Urdele Pass, reaching up to 2,145 meters a.s.l.. You can sense Transalpina’s magnitude there.

On the way you are likely to encounter tourists, slowly moving cars and even buses. Thus, the best time to go there are early morning hours. Often the beautiful views are hidden behind clouds, leaving you unsatisfied, but at the same time the moody weather adds adrenaline to the ride, making you glide along the edge of the misty depths. Gigantic emotions.

The map of Transalpina

Info about the route:

Eagle above the Parang Mountains 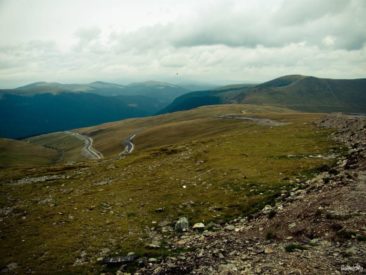 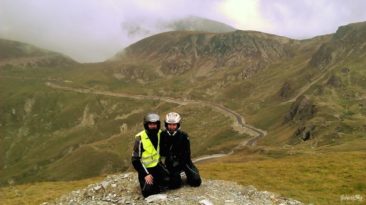 Szklarska Poreba, Karpacz and surroundings are very popular among enthusiasts of two-wheelers. It’s not a... 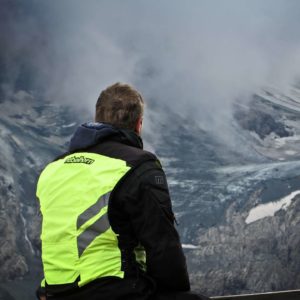 The road from New York to South Dakota through Canada wasn't the most exciting one. Throughout 2 000 miles (3218 km) and... Just after enjoying the Montenegrin coast to the full, when heading towards Kotor, it is... Every motorcyclist asked about the best motorbike roads in Romania, no doubt will think of... Sometimes during a journey we encounter unforeseen situations involving local communities. On the alpine, very... 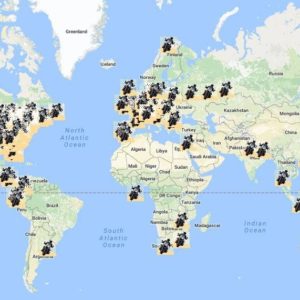 It has been a year since we applied for a visa to the USA, in...